The Minister of External Affairs of the Republic of India, H.E. Subrahmanyam Jaishankar, on Wednesday, paid a courtesy call on H.E. President Ibrahim Mohamed Solih. The meeting was held at the VVIP lounge at the Hanimaadhooo International Airport.

Speaking with Dr Jaishankar, President Solih expressed his appreciation to the minister for attending the groundbreaking ceremony of the Hanimaadhoo International Airport expansion project. He added that the project would transform the economic landscape of the country and the northern region into an economic hub.

The President also expressed his gratitude to the Prime Minister of India, H.E. Narendra Modi, the government of India and its friendly people for the continued assistance to the Maldives.

President Solih and Dr Jaishankar discussed strengthening bilateral relations between the two countries. They emphasised their commitment to enhancing cooperation in areas of mutual interest, such as tourism cooperation, business-to-business cooperation focusing on small and medium-sized enterprises and other areas of bilateral, regional and multilateral cooperation. The President also noted the financial and budgetary support provided to the Maldives by the government of India.

In conclusion, President Solih and Dr Jaishankar reaffirmed their continued commitment to strengthening Maldives-India cooperation in the coming years. The Maldives and India established diplomatic relations on November 1, 1965. 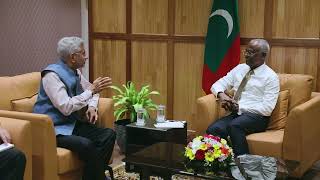