The President of the Republic of Maldives, H.E. Ibrahim Mohamed Solih, and the Prime Minister of the Kingdom of Cambodia, Samdech Akka Moha Sena Padei Techo Hun Sen, held official talks between the two governments on Monday. Senior officials of both countries joined them for the discussions at the President's Office.

During the deliberations, President Solih and Samdech Techo Prime Minister Hun Sen shed light on the existing bilateral relations between the two countries and stated that this visit marks a historic milestone in bilateral ties. They noted that it had already opened a new chapter of close cooperation, which will be enhanced in the coming months and years. The leaders engaged in dialogue on shaping the two countries' future ties in numerous sectors where the Maldives and Cambodia can share mutual arrangements.

In this regard, they held extensive discussions on boosting bilateral, regional, and international cooperation in mutual areas of interest. The President and the Prime Minister discussed various topics, including education, human resources development, tourism cooperation, economic and trade cooperation, and increasing air connectivity. They also discussed cooperation in healthcare, fisheries, agriculture, environment, and climate change; regional and international cooperation; and areas of security and counterterrorism.

President Solih stressed the importance of healthcare sector development and stated that the Maldives has embarked on an ambitious programme to enhance healthcare, focusing on three main areas: training and specialisation of local healthcare professionals, recruitment of expatriate doctors and specialists, and sourcing of generic and controlled pharmaceuticals.

President Solih also expressed his ambition to strengthen cooperation in higher education and expressed interest in exploring educational opportunities for Maldivian youth in Cambodia. He stated that the government would be interested in seeking opportunities to establish an exchange programme for students and noted that it would open up a new knowledge stream in academia. The President expressed his pleasure at offering two scholarships for Cambodian students to attend the Maldives National University. The Cambodian Prime Minister provided 10 scholarships for Maldivian students to study there.

Discussing cooperation in the fields of economy and commerce, President Solih noted that the Maldives is looking to expand its economic outlook and diversify its industries. He also stated that the Maldives strongly encourage investment and invited Cambodian investors to take advantage of the opportunity to form meaningful and mutually beneficial partnerships with Maldivian businesses. He further expressed hope for a very fruitful outcome from the ongoing business forum between the members of the chambers of commerce of both countries.

President Solih and Samdech Techo Prime Minister Hun Sen also discussed the possibilities of seeking training and skills development opportunities for Maldivians at Cambodia's agricultural institutions and building cooperation mechanisms. The President expressed interest in seeking opportunities to import rice to the Maldives from Cambodia at a competitive rate. He added that the Maldives was interested in exploring further options to import other agricultural produce and non-food items.

Shedding light on the agreement that will be exchanged later today on tourism cooperation, President Solih and Samdech Techo Prime Minister Hun Sen stated that it would enable relevant institutions in both nations to form a Joint Working Group and pursue initiatives related to joint marketing and promotion, establish air links, and exchange initiatives in the hospitality sector to achieve the shared tourism goals.

President Solih and Samdech Techo Prime Minister Hun Sen also discussed the ongoing deliberations on concluding an air services agreement between the two countries and expressed hope for it to be realised soon, which would be central to future cooperation in all areas.

Concluding the official talks, the President and the Prime Minister reaffirmed their commitment to bolstering the bonds of friendship between the two countries.

Prior to the official talks the President and the Prime Minister also met briefly for restricted talks at the President's Office. 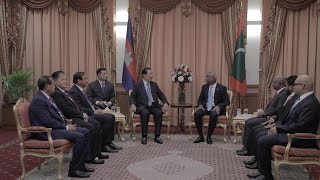 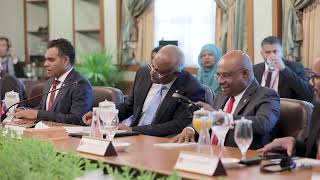