The President confers the "President's Badge" to a Girl Guide President Ibrahim Mohamed Solih on Tuesday conferred the "President's Badge," the highest honour awarded to Girl Guides, to Ms Fathimath Yumna Atif. The President presented the badge to Ms Atif at a ceremony held at the President's Office.

At the ceremony, the President congratulated Ms Atif on receiving the honour and admired her contributions as a member of the Girl Guide movement. He also described the movement as a crucial activity for students.

Ms Atif is the 14th student to receive the badge since its introduction in 1998. Highlighting that it was the first time a girl guide representing a school outside of Malé City received the honour, the President described it as a remarkable achievement for Baa Atoll Education Centre. 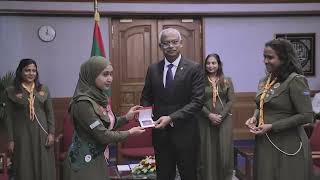