The Dutch Ambassador presents credentials to the President The Ambassador of the Kingdom of the Netherlands to the Republic of Maldives, H.E. Bonnie Horbach, presented her credentials to H.E. President Ibrahim Mohamed Solih. The ceremony was held at the President’s Office.

Speaking with the Ambassador afterwards, the President congratulated her on her new appointment and discussed ways to strengthen the existing relations between the two countries.

During the discussions, the President expressed hope that the Dutch government would consider easing visa requirements for Maldivians. He also spoke about expanding cooperation in the fisheries sector and expressed hope of reducing tariffs levied on Maldivian fisheries exports.

The President and the Ambassador also discussed ways to increase training and higher education opportunities for Maldivian students and other areas of mutual interest, including tourism, climate change adaptation and mitigation, and regional security. The Dutch Ambassador expressed the interest of Dutch private sector companies in investing in the Maldives.

In conclusion, the President and the Ambassador expressed hope for renewed and strengthened ties between the two countries under the new Ambassador’s tenure. 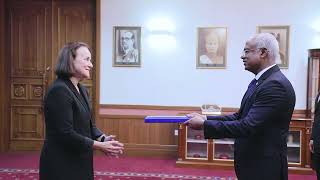