Ahmed Thasmeen Ali completed his bachelor’s degree in Economics from the University of Warwick, United Kingdom. Earlier, he served as the Minister of Atolls Administration, Minister of Home Affairs, and as a Member of Parliament and the Deputy Speaker of Parliament. 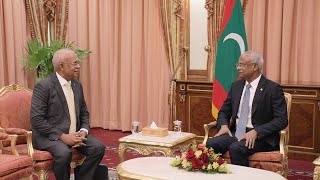