President Ibrahim Mohamed Solih on Monday afternoon signed a book of condolences opened in memory of the late Umar Zahir, a state dignitary and honouree of the Order of the Distinguished Rule of Izzuddin. The book was placed at the National Art Gallery. 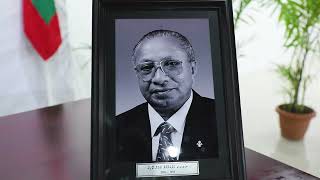